So, it has been a while since I last posted with any new work.. so, you may be asking if I have in fact done any work over the past few months? The quick answer: yes. The long answer: yes, but most of it is incomplete and unfit to "put out there".
Speaking of "out there", for my 129A class, we (the advanced students) are participating in Dominance War which is an online gaming competition. Unlike in the past where they've had only one main challenge, they have decided this year to introduce shorter mini-challenges. We were required to do the first which was due to be submitted by the end of monday.
The challenge was to take one of three pre-made poly meshes to work with, and create a character: a War General. The only real guidelines were that we could not change the maya mesh to break the silhouette and the character had to read as being a war general. The first rule wasn't so bad, it was making the guy look like a high ranking official that was the real challenge. I'm not sure I was successful in this, but I am somewhat happy with the results. I'm finally getting the hang of z-brush! Finally.
and so, I will present to you here, two versions of my war general. The first being the completed submission piece (which had to be rendered in maya on the original low-poly mesh) and the second is rendered straight from z-brush (3mill polys) with color map only.
Enjoy! 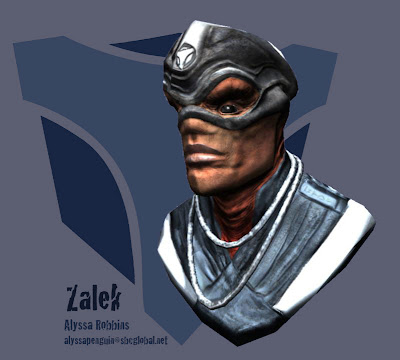 Posted by Alyssa Robbins at 7:53 PM